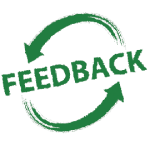 Today, another experience with some of my teams, in this case I will address “Feedback” inside the team: one way to get feedback and improve your team. A few months ago I was feeling like a “feedback” collector on behalf of teams. I was tired of doing that; comments were not very constructive and sometimes it was hard to explain them to the team.

I took one risky decision: I would deploy one of the core protocols at the end of each review. After a few discussions with the teams, they were not really convinced, but they let me try it. We deployed the “Perfection Game” feedback. It means that at the end of each review meeting (every 2 weeks), stakeholders will evaluate the meeting itself and they will use the ‘perfection game’ protocol.

For those who don’t know it, here it is at the core protocol:

The “Perfection Game” protocol will support you in your desire to aggregate the best ideas. Use this protocol whenever you desire to improve something you’ve created.

As you can see, it is very simple; however it comes with a few risks. Here are a few that came to mind when I decided to deploy it:

Here are the actions I took to mitigate the risk at each level:

Product Owner (for me the PO is part of the team, but sometimes, I take extra time with him to explain the ideas. It helps me in the elaboration and exposure of everything to the full team):

After 3 months of applying the ‘Perfection Game’ protocol, I am able to say that it was a good idea to do it. Why? Check these comments:

I don’t have any doubt about the result. I am very happy, and I am ready to do it again with some minor tweaks. In the end I got exactly what I intended to get:

What about you? Do you have another way to do it? If yes, don’t be shy, share it with us. I will be more than happy to listen to more options.

Feel free to ask questions or give your feedback here.